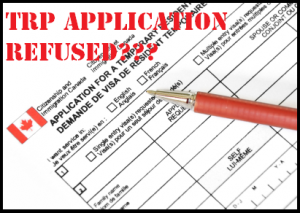 What is a TRP?

The first step to understand why your application was refused is to make sure you applied for the right document. A Temporary Resident Permit is a specific document that would only be approved for people in specific situations. Essentially, it allows the individual who is holding the permit to enter Canada even if they have been identified as an inadmissible person. This is only granted to the applicant if they are in specific extenuating circumstances that require them to enter Canada. This means that the individual does not meet the requirements as specified by Immigration and Refugee Protection Act (IRPA). The TRP document will allow someone who does not meet these requirements to still enter Canada, provided they have a strong reason to be here and will not threaten the safety and security of Canadian citizens and permanent residents.

Can I apply for TRP as Refugee?

If you were an applicant for refugee protection and had your claim rejected within the last year, you would not be eligible to apply for a TRP. Therefore, if this is your situation and you have received a refusal for your TRP application, you may wish to contact an immigration expert or wait until the one-year period is up. The exception to this is if you are a victim of human trafficking. In this case, even if your refugee claim was rejected within the last year, your application may still be considered.

There is a processing fee for the TRP of $200 (CAD). If you did not pay the fee or did not include evidence that you paid this fee, that may be a reason for refusal of your application. This fee is non-refundable, even if your application is refused or if you retract the application.

How Long Should it take to Process a TRP?

If you have not received a response yet, do not immediately assume that your application has been rejected. Temporary Resident Permit applications can take months to process; thus, you will need to wait for a while before assuming that your application has been denied. Also note that this means you should apply for a TRP as soon as possible and as early as possible in advance of your travel date. Though you can also apply for a TRP at a Canadian Port of Entry, there is still a chance that your application will be denied there. Though it may be less of a chance, given that it would be up to the immigration officer to effectively cancel your trip and ensure you return back to your home country, it should theoretically be decided in the same was as a TRP application would have been decided had it not been given at the port of entry. Thus, this is still a risky option.

Who reviews my TRP case?

As soon as you apply for a TRP, your application will be reviewed by an immigration officer. The officer will need to write a case summary and come up with a recommended decision, after which the file will be given to a Designated Decision Maker. The final decision is at the discretion of the Designated Decision Maker. This individual will make their decision based on the need for you to be in Canada as well as the risks of your presence. Note that this decision might also be based on an interview (if you were asked for one). If the Designated Decision Maker makes a positive decision, this means that you will be issued a Temporary Resident Permit. After making this decision, the Designated Decision Maker will also decide how long your TRP will be valid for. Note that this decision relies on the validity of your passport; your TRP cannot be valid for longer than your passport is (even if you have requested it in your application through your travel needs). Thus, ensure that you have a valid passport that also accommodates your travel needs. If you see that your passport is coming up on its expiration date, ensure that you get it renewed as soon as possible. In most cases, the final decision stops within Immigration, Refugees, and Citizenship Canada (IRCC). Thus, you will receive a document from IRCC stating the outcome of your application. If you have been refused, you will receive a formal refusal notice. If your application has been accepted, you will receive a Temporary Resident Permit. In some cases, the Canada Border Services Agency (CBSA) may offer some input into your application. Though their input is taken into consideration, it is still the onus of the IRCC to communicate with you what the final result is. The only exception is if you have a police assist case, in which circumstance the CBSA will be responsible for the final communication.

What happens when my TRP application is refused?

When the final decision is a refusal, there are set procedures in place that the immigration officers need to follow. The first thing that they must do is record the refusal in the Global Case Management System (GCMS). This means that the refusal may show up when you enter Canada next time. If you filed for an inland application (filed for a TRP from within Canada), you will receive a notification of refusal in the form of writing (a written document). After this, the immigration officers must ensure that you both received the document and complied with the outcome. This means that if you have received a notice that your TRP is refused, you must confirm that you departed Canada or checked out, as stated in the document you received. Remaining in Canada after being ordered to leave is illegal, and you will need to face consequences if you do so.

What does the TRP Refusal Letter include?

A refusal letter from Citizenship and Immigration Canada should include the following:

Have you received a negative TRP? Refused to enter Canada and confused on how to proceed? Contact the experience and dedicated team of legal professionals at Akrami and Associates. Our team can review your refusal and answer any questions you may have regarding what to do next. With Akrami and Associates, there is always a way!