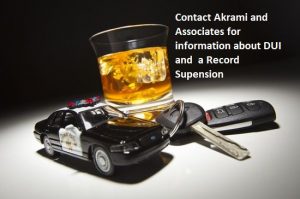 What is Driving under the Influence

What Happens if I Drive while Being Drunk

If you have consumed alcohol, you are not supposed to drive. Nevertheless, everyone makes mistakes. If you are pulled over by an officer, the officer has reasonable grounds to suspect you may be driving under the influence of alcohol. Reasonable grounds include observations such as erratic driving or smell of alcohol on your breath. The officer may ask you first to perform a physical coordination test. After performing the physical coordination test, you may be requested to provide a breath sample, if the officer believes you are under the influence. If you fail to provide a breath sample, you may be requested to provide a blood or urine sample.

After Being Pulled Over

You may be arrested, if an officer has reasonable grounds to believe you committed DUI. If you fail to provide a breath sample, your driver’s license can be suspended for 90 days. In Alberta, your driver’s license can be suspended for 6 months if you cause any bodily harm. If you are convicted of driving under the influence, you are most likely required to pay a fine and receive a license suspension. You may be required to take some rehabilitative courses as well. It is a criminal offense if you fail to comply with the tests without a reasonable excuse, and the officer was operating on reasonable grounds to pursue breath, blood or urine samples. Nevertheless, if the officer is requesting you to provide the samples without reasonable grounds, then the case may be in violation of Section 8 of the Canadian Charter of Rights and Freedoms. If you submit a breath sample that is not quite at .08 but is still a considerable amount, you may still be subject to penalties including suspension of your driver’s license for a period of time. Each province and territory has different allowable blood alcohol concentration (BAC), and each jurisdiction has differing penalties ranging from 12 to 24 hours suspension.

What if I Have Been Convicted of DUI

There are many consequences of your DUI. For example, you may be rejected by a potential employer after failing a background check. Alternatively, you may lose your current job if your employer decides to do a background check. In order for you to erase your DUI record in Canada, you will need to obtain a record suspension (formerly a pardon). If you are a foreign national who is travelling to Canada, you may be denied entry. If you want to come to Canada with a DUI on your criminal record, then you will need to overcome your inadmissibility by applying for a temporary resident permit or applying for criminal rehabilitation.

How do I Get a Pardon/Record Suspension

As previously mentioned, Canadian government is very strict when it comes to assessing DUI. In order to compile a strong record suspension application, you will need to prepare for the correct documents. Having to prepare all the required documents can very confusing and exhausting. As a result, it is highly recommended that you seek out professional and experienced help prior to submitting the application. Akrami & Associates work and have experience with many different immigration matters. We have helped many of our clients with criminal inadmissibility issues. Please feel free to contact Akrami & Associates at 416-477-2545 for more information, or if you would like to book a consultation with an immigration professional for more advice. With Akrami & Associates, there is always a way!