New Rules for Pardons in Canada 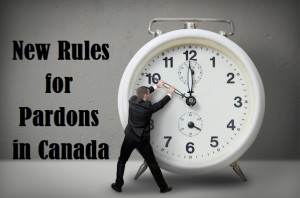 New Changes to Length to Get a Pardon

In order to remove your criminal record from a public record, you must first apply for a Record Suspension, or also known as a Pardon. In March of 2012, the eligibility requirements had changed for the waiting period for a summary offence from three years to five years which evidently affected the lives of many with a criminal record. This was a change made in the legislation by the Conservative government. However, with the new Liberal government, they are considering more changes to improve the lives of individuals with criminal offences. In this article, I will address the new rules to Pardons Canada and how this will affect individuals with criminal records.

How These Changes Affect Individuals

It can be extremely devastating for any individual who was waiting for those three years after they have completed their sentences, in order to apply for a pardon, only to find out that the new legislation has increased the waiting period. Individuals who have had a criminal past and wish to be pardoned of their offences should have the option, legally, to proceed with the required three years if their offences happened before the legislation. As aforementioned, this violates the offenders’ charter of rights and freedoms and can be detrimental to their life and well-being. Criminal offences not only affect an individual’s lifestyle but it can also affect their career and any potential travel in the future. Therefore, it is essential that the Liberal government investigate further and try and find a solution for these individuals as it can benefit them and change their lives for the better.

If you have a criminal record and would like to pursue a Record Suspension, we can help you with this process. It is very important to find out whether you qualify for a Record Suspension and if you have met the minimum time period needed to apply for a Record Suspension. It is also very beneficial to be aware and keep updated with any new announcements the Liberal government discloses. Applying for a Record Suspension can be confusing if you are unfamiliar with how Immigration applications work. Moreover, any Immigration application can become overwhelming if done alone; therefore, it is highly recommended that you seek out professional and experienced help before attempting to apply. Here, at Akrami & Associates, we work and have experience with many different immigration issues. We have helped many of our clients receive Record Suspensions and are now free of their criminal past. If you believe that you might be eligible, please feel free to contact Akrami & Associates at our office at 416-477-2545 for more information or if you would like to book a consultation with an immigration professional for more advise. With Akrami & Associates, there is always a way!