Is it Possible to Be Pardoned of an Offence in Canada 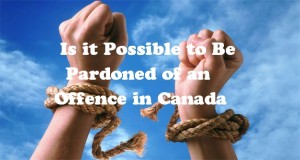 Pardoned of an Offence

If you currently live in Canada and certain unfortunate circumstances happened where you now have a criminal record, thankfully there is still a chance for you to get pardoned. This pardon is usually referred to as a record suspension. In this article, I will explain what a record suspension is, who is eligible for this suspension, limitations, certain scenarios thatwould fall under a record suspension, and further information.

What is a Record Suspension

Who is Eligible for a Record Suspension

Circumstances that do not need a Record Suspension

It is also beneficial to know that if you were found guilty of an offence as a young offender in a youth court or youth justice court, yourrecord will be destroyed or archived once all applicable time periods have elapsed under the Young Offenders Act or the Youth Criminal Justice Act. Additionally, if you have received an absolute discharge for the offence you committedon or after July 24, 1992, the Royal Canadian Mounted Police (RCMP) will automatically remove it from its system one year afterthe court decision. Similarly, if you received a conditional discharge for the offence on or after July 24, 1992, the RCMP will automatically remove it 3 years after the court decision.

Under the CRA, the Parole Board of Canada (PBC) is the official and only federal agency responsible for ordering, denying and revoking record suspensions for convictions under federal acts or regulations of Canada.

What are the Limits of a Record Suspension

If you are interested in getting the process started and feel as though you are eligible to be pardoned, Akrami & Associates would be more than happy to help you. We are a group of highly skilled professionals that have had experience with these specific cases. Feel free to contact our office at 416-477-2545 for more information or if you want to book a consultation with an immigration professional for more advice. With Akrami& Associates, there is always a way!