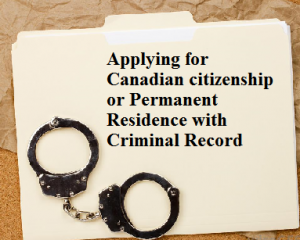 What does Permanent Residence Mean?

If you have been granted Permanent Residence (PR) it means you can permanently live in Canada. As PR card holders you have more rights than refugees and temporary visitors but not same rights as Canadian citizens. As a PR card holder you can enter and exit Canada as long as you want but if you fail to comply with the conditions set then you can potentially harm yourself of your PR being taken away from you.

Can I apply for Permanent Residence if I have Criminal Record?

If you have criminal record and like to apply for Permanent Residence (PR) in Canada you first have to overcome your inadmissibility issue prior to being eligible to apply for PR. So what this means you have to have your record cleared and have obtained an approved Criminal Rehabilitation or have been Deemed Rehabilitated before any application for PR can be approved. When applying for these applications you will need to show the sentence imposed on you, fines you had to pay, when you completed your sentence, probation you had serve or whatever that was imposed on you. Therefore, you would have to provide copies of your police documents, court transcripts and other documents that relates to your conviction. When applying for the above mentioned application it is highly recommend to consult with immigration law firm such as Akrami & Associates to have a higher chance of approval. These applications require ample amount of details of the criminal charges and to determine your eligibility for Permanent Residence consult first with an immigration expert. You don’t want to waste your time applying for something you perhaps may not be eligible or missing out on important documents that can potentially harm your chances of obtaining PR for Canada.

Can I lose Permanent Residence status because of my Criminal Record?

What happens once I get charged with a Criminal Record being as Permanent Residence?

Once you are charged with a criminal record as a Permanent Resident then the police will provide this report to the Canada Border Service Agency (CBSA). Once CBSA receives the report they will investigate the severity of the offense and determine effect on your immigration status. Under Immigration, Refugees and Citizenship Canada you are considered inadmissible to Canada on the grounds of criminality and serious criminality for:

I have a Criminal Record can I apply for Canadian Citizenship?

Who will not be granted Canadian citizenship?

You will not be granted Canadian citizenship if you:

Can I lose my Canadian citizenship status because my criminal record?

In very rare situation a person’s citizenship can be revoked. For example, if you had committed an offence during the process of getting your Canadian citizenship or PR status. These offences include misrepresentation such as by lying or hiding offences that have occurred in the past. So just because you were not convicted does not mean you cannot lose your citizenship status. IRCC minister needs to be satisfied that the offence took place and then an application can be made to the Federal Court for judicial review.

Contact Akrami & Associates if you have a Criminal Record