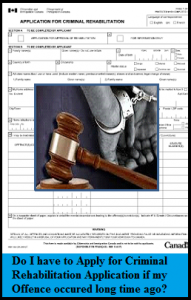 Denied Entry to Canada for your Criminal Record?

Are you tired of going through tedious long processes when you have to visit Canada to meet your family or simply for leisure or work because of a crime you committed a long time ago? You can solve this issue by applying for the Criminal Rehabilitation that is offered by the Canadian Government in order to determine if you are deemed rehabilitated. Proving positively will mean you are no longer inadmissible into Canada and are also not required to apply for a temporary resident permit. This will also ease your application for Permanent Residency should you wish to do so.

Charges and Convictions that can deny you Entry into Canada

I had an offence as a Juvenile can I be Denied Entry to Canada?

A juvenile, or young offender, is a person as described officially in Canada, who is 12 years of age or above but less than 18 years if age.

A young offender is not inadmissible if

You are considered in inadmissible as a young offender if

What is Criminal Rehabilitation

Rehabilitation will legally remove the grounds on which you are considered criminally inadmissible. Rehabilitation means that you have recovered towards a stable lifestyle and that it is unlikely you will be involved in future criminal activity.

Your eligibility to apply for a Criminal Rehabilitation program depends on

When are you Considered Deemed Rehabilitated?

When to Apply for Temporary Resident Permit

If you need to come to Canada without applying for Rehabilitation – either because you could not apply due to 5 years not being over or you were not give a record suspension from Parole Board of Canada, you will require special permission to enter or remain in Canada. This is done through the application package on Canada Immigration website. After review the package the immigration officer may advise you if you are out of Canada, that you do not travel to Canada or that you apply for Temporary Resident Permit (TRP) in order to enter Canada. If you at any port of entry the officer could tell you that you are denied entry into Canada and ask you to return immediately to your country of departure, take enforcement action such as arresting, detaining, or detention or advise you to apply for a temporary resident permit. If you are already in Canada, you could be asked to leave Canada voluntarily, or enforcement actions such as arrests could be made against you, or you could be advised to apple for special permission such a temporary resident permit in order to continue staying in the country.

Should I hire a Representative to help me with my Criminal Rehabilitation or TRP application?

You may choose to appoint a representative on your behalf to conduct to matters with Immigration, Refugees, and Citizenship Canada and the Canada Border Service Agency. A representative could be uncompensated or compensate depending on what your preferences are. If you do appointing a representative on your behalf then Border Service Agency and the Immigration, Refugee, Citizenship board will contact the representative first hand, not the applicant. The immigration officer assesses the need versus risk and many times applicants fail to provide sufficient supporting documents to demonstrate they are not a risk to Canadian citizens and are making better choices since completion of their offense on record. Therefore, it is recommended to get the assistance of an immigration law firm that help you gather all the supporting documents to have greater chance in successful entry into Canada.

Certain factors would be considered when reviewing your applications such the number and seriousness of your offences, the improvement or any change of your behaviour since the day the offence was committed, your explanation of the offence and a justification of why you will not commit the offence again, if a group of your peers agree that you have improved and support you, and your present conditions and circumstances. This process can usually take well over a year; you will be notified in writing once a decision regarding your application has been reached.

What Happens when my Criminal Rehabilitation Application Approved?

Receiving approval id only part of the entire process to determine if you are eligible to enter or remain in Canada, once you rehabilitation application has been approved, you can then travel with ease to Canada as long as you don’t reoffend. Depending on the nature of your visit you may require additional documents, for example if you plan on working in Canada you would have to apply for a Work Permit and meet the requirements under that category. So the criminal rehabilitation application is only for inadmissibility issues to Canada this document does not exempt you from the work permit.

Applying for rehabilitation can seem as a very daunting and overwhelming task. If you are considering applying for it and are confused or do not completely understand what information and documents will best convince the authority to approve your application, or have applied before and were refused, then do not hesitate to contact us at Akrami for assistance. With Akrami & Associates there is always a way!!