Coming to Canada with a Dismissed DUI Charge 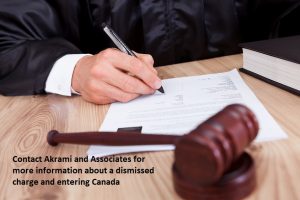 What is Driving under the Influence

Can I Enter Canada with a Dismissed Charge

According Canadian immigration law, inadmissibility cannot be based upon an offense that is deemed as a dismissed charge or an acquittal. In other words, a dismissed charge or an acquittal should not be used as grounds to deny an individual’s entry to Canada. Dismissals can be the decision of the court at the conclusion of a trial, or it can be a result of successful compliance of a series of conditions imposed by the court. However, having a dismissed charge can be tricky in terms of a person’s inadmissibility. Simply saying that a charge was dismissed without any supportive evidence will not be considered sufficient. For example, the court might have just dismissed one charge only, but there are other charges that still remain. Consequently, charges that are not dismissed on your record may still make your criminally inadmissible. In this blog, you will learn information about entering Canada with a dismissed charge.

If you have an arrest record for a crime and were charged but never convicted, or if you were acquitted, you should technically be deemed admissible to Canada. Each case is unique, though.  That said, some border officers are vigilant, and your criminal record can still cause you trouble. If the border officer is concerned about acquittals or non-convictions on your criminal record, you may have a rough time attempting to enter Canada.

For individuals whose case got dismissed, the initial DUI charge should no longer make you inadmissible to Canada. Cases that were not prosecuted by the court also cannot be used as ground to prevent your entry to Canada. However, the following situations should be carefully taken into consideration; some of them may potentially prevent you from entering Canada.

If a person has a dismissed DUI on record, but there is another DUI that is not dismissed, and for which ten years have not yet passed since the completion of all sentences, you can still be deemed as criminally inadmissible.

If a person has a dismissed DUI, but there is another separate, non-dismissed, offense on record, careful consideration should be given to that particular offense to ensure that offence does not cause inadmissibility. Not all offenses will result in inadmissibility. As a matter of fact, what matters is not the offense itself, but what its equivalent would be in Canada, and the applicable punishment.

If a person have a DUI that has been dismissed, and has absolutely nothing else on record, entry into Canada should be allowed. However, this is where the strong supportive evidence will have a significant impact. You must provide proof that shows your offense has effectively been dismissed, and you have no other offenses on record.

What if My Offences are Not Dismissed

As previously mentioned, Canadian government is very strict when it comes to assessing foreign travelers’ inadmissibility. In order to compile a strong a temporary resident permit or criminal rehabilitation application, you will need to prepare for the correct documents. However, having to prepare all the required documents can very confusing and exhausting. It is also essential to note that this type of application is difficult to pursue on your own. Therefore, it is highly recommended that you seek out professional and experienced help prior to submitting the application. Akrami & Associates work and have experience with many different immigration matters. We have helped many of our clients create strong Temporary Resident Permit and Criminal Rehabilitation applications. Please feel free to contact Akrami & Associates at 416-477-2545 for more information, or if you would like to book a consultation with an immigration professional for more advice. With Akrami & Associates, there is always a way!