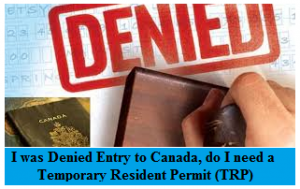 Denied Entry to Canada for Inadmissibility

Canadians are known to be polite and easy-going but when it comes to crossing the borders the immigration officers take their job seriously and don’t mess around when it comes to entering Canadian borders and ensuring the person has no inadmissibility issues. The ability for you to enter Canada is at the discretion of the officer and based on the facts presented will determine your admissibility to Canada case-by-case basis. So if you happen to have inadmissibility issue ensure you meet all the requirements prior to attempting to cross the border. Depending what your offense was on record and when you have completed whatever that was imposed on you; you may be eligible to apply for either a Temporary Resident Permit (TRP) or Criminal Rehabilitation. Temporary Resident Permit are issued for temporary entry into Canada and Criminal Rehabilitation is permanent document that allows you travel with ease if you meet the requirements. Below we will focus only on the temporary document TRP and its eligibility criteria.

What is a Temporary Resident Permit (TRP)?

A Temporary Resident Permit (TRP) is a travel document issued to individuals who wish to enter Canada but have inadmissibility issues that prevent them from entering Canada due to a number of reasons. Temporary Resident Permits are usually issued to individuals who have a criminal record and want to enter the country based on certain circumstances and/or external factors. These criminal records, whether major offences – such as acts of terrorism – or minor offences – such as shoplifting, dui, misdemeanour, could cause inadmissibility problems. Issuing a Temporary Resident Permits to foreign nationals allows immigration officers to determine if an individual with a criminal record should be allowed to enter the country based on the reasons they provide; and if so, how long they can stay in the country.

Reasons for which admissibility issues could deter an individual to enter Canada include, but are not limited to:

Do I need TRP if I was convicted as Minor?

If you were convicted of crime in a foreign country where you were under the age of 18, you may still be able to enter Canada without first having to obtain a Temporary Resident Permit, but it all depends how you were charged as minor or adult, severity of your offense, reasons you want to travel to Canada, what your offense equates to Canadian law and much more. In order to apply for the TRP you must have a valid reason to enter and stay in Canada, such as attending a conference for your business or company, or attending a family reunion. For any reasons of entry, an immigration officer at a port of entry such as an airport or sea port will determine if the reason you stated for entry is eligible for you to be issued a Temporary Resident Permit. Even if you believe the reason of inadmissibility to be minor or if it occurred from a long time ago you must show proof that your reason for seeking entry is valid.

For a successful Temporary Resident Permit application, you will have to provide an abundant and sufficient amount of paperwork and documentation that will convince the immigration officer that you will obey the law while you are in Canada that your reason for entry is valid, that you will respect the terms of your stay in Canada, and that you will leave Canada once your authorised period of stay is over. Contact us at Akrami and Associated today to book a consultation and determine what next steps you should take. With Akrami & Akrami there is always a way!!