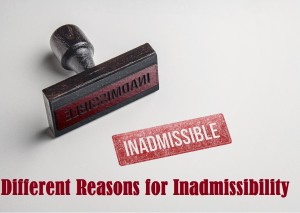 Reasons for Inadmissibility to Canada

Any person attempting to enter Canada may be denied a visa, entry to Canada, or removed from Canada, for any of the following reasons.

There are security reasons that raise a concern for Immigration. Security reasons include violence or terrorism; espionage; subversion, such as an attempt to overthrow a government, etc.; or membership in an organization involved in any of these security issues.

There are health grounds that raise a concern for Immigration. For instance, if you have a condition that may endanger and/or affect public health or public safety in Canada, then you may be deemed inadmissible. Additionally, if Immigration suspects that you may cause excessive demands on health or social services within Canada, then you may be deemed inadmissible. Of course there are exceptions to this, but if that’s the case, then you must prove your health grounds.

There are financial grounds that raise a concern for Immigration. For instance, if you are unable, incapable, or unwilling to support yourself or your family members during the stay in Canada, then you may be deemed inadmissible. When visiting Canada, one of the most important factors you must take into consideration is financial support. You must prove to Immigration that you have sufficient funds to support your stay in Canada as well as your travel to and from Canada.

Other reasons that can raise a concern for Immigration are failures to comply with any provision within the Immigration and Refugee Protection Act (IRPA) and/or having an inadmissible family member.

How to Overcome Inadmissibility

There are several options that you can pursue to overcome your inadmissibility, of course this entirely depends on your specific circumstance. The most common applications that individuals with inadmissibility pursue are a Temporary Resident Permit and/or a Criminal Rehabilitation application. Both are similar but have very distinctive differences as well. A temporary resident permit allows an inadmissible individual to enter and/or stay in Canada only if it has been five years since the end of the sentence imposed or if you have valid reasons to travel to or remain in Canada. On the other hand, a Criminal Rehabilitation allows an inadmissible individual to enter and/or stay in Canada only if they were convicted of an offence in Canada; convicted of an offence outside of Canada that is also considered a crime within Canada; and/or committed an act outside of Canada that is considered a crime under the laws of that country and equivalently would be punishable under Canadian law. Also, it is important to consider the time periods since the sentences were imposed. Specifically, a minimum of five years must have passed since the act was committed. Additionally, the five years only start after the last day of the sentence imposed.

It is essential that you have taken all of the aforementioned factors and information into consideration before you attempt to enter Canada with inadmissibility. If you are inadmissible to Canada and would like to apply for a Temporary Resident Permit or Criminal Rehabilitation, it is important to note that these are difficult applications to pursue on your own. It is highly recommended that you seek out professional and experienced help before attempting to submit the application. Here, at Akrami & Associates, we work and have experience with many different immigration issues. We have helped many of our clients with inadmissibility gain entry into Canada as visitors. If you believe that you may be eligible for a Temporary Resident Permit or Criminal Rehabilitation, please feel free to contact Akrami & Associates at our office at 416-477-2545 for more information or if you would like to book a consultation with an immigration professional for more advise. With Akrami & Associates, there is always a way!