What to do when Denied Entry into Canada 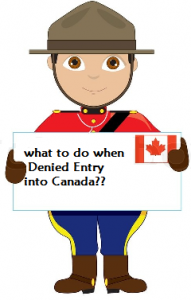 Overcoming an Inadmissibility to Canada – Criminality

If you are planning to travel to Canada and have a criminal record, you may be found inadmissible to the country. Criminal inadmissibility is a broad category and travelers are often surprised when they are screened by a Border Services Officer or asked questions about their criminal record. There are 3 basic categories of criminality that could result in being denied entry to Canada: Organized Criminality, Serious Criminality, and Other Criminality.

Having gang ties would be a classic example of being refused entry due to organized criminality. Crimes like money laundering, drug smuggling and human trafficking are often assigned to this category as well. Organized criminality is best described as any criminal action taken by members of an organized group that is not restricted by political borders Even if you have not committed any crimes but the Border Services Officer becomes aware that you are affiliated with a gang or some other group with a criminal element, you risk being denied entry to Canada.

Other criminality tends to be the most common type of criminal inadmissibility experienced by travelers to Canada. Crimes in this category are usually on the misdemeanor level and include offenses such as: Normally in the Canadian system, this type of charge is referred to as a Summary Conviction and will result in imprisonment of less than 5 years.

Surprise Refusals at the Border

Often travelers to Canada do not expect to be stopped at the border or port of entry for these types of relatively minor charges. However, every conviction must be assessed under Canada’s Criminal Code. Quite often under the Canadian system even misdemeanor type charges can potentially be assessed as indictable offences. That means that most misdemeanor charges or even reduced charges can result in a denial of entry if the Border Services Officer believes that you might re-offend or be a risk to Canadians or Canadian society.

It is also common for travelers to Canada to be surprised when an officer asks them about arrests or convictions that may have happened many years ago. The database referenced by Border Services Officers when they are screening travelers contains details of criminal histories at the national, state, and even regional level. Quite often these databases may not be complete, particularly for older charges on record. These older convictions may not have been properly updated in the shift from a paper based to an electronic filing system. What this means is that you may have long ago completed the terms of your sentencing, had your charges expunged, or been found not guilty, but it may not be reflected in the current database.

There have even been cases of travelers being refused simply for having an arrest on record. The arrest may not have resulted in a conviction or may have later been withdrawn by the court. However, if there is only an arrest on record, quite often the Border Services Officer will have to assume you were found guilty of the arrest. Unless there is documentary evidence to prove the contrary, an arrest on record can also result in a refusal of entry to Canada.

If you are traveling to Canada and think that you may be criminally inadmissible, it is in your best interests to ask for special permission to enter the country. This can be done by applying for a Temporary Resident Permit (TRP). A Temporary Resident Permit is a document given to travelers by either a Canadian Consulate or a Border Services Officer which allows someone with a criminal inadmissibility to travel in Canada for a limited period of time. To obtain a Temporary Resident Permit, you must first submit a TRP application. The application will contain all of the necessary forms and supporting documentation to show that you are not a threat to Canada.

Some of the documentation that could be included with a TRP application could be:

A TRP application can be submitted either at a Canadian Consulate, at the border / port of entry, or both. Most legal professionals working in Canadian immigration law would recommend submitting a complete TRP application at the Consulate beforehand and then traveling to the border or port of entry later. Either way, the application must be prepared in such a way that the Border Services Officer is satisfied that you are not a risk to Canada and should be granted access to the country. A Temporary Resident Permit can be granted for up to 3 years, but again, this is entirely up to the discretion of the officer processing your application. There have been TRPs granted for as little as 1 day.

The length of validity of a Temporary Resident Permit can be affected by:

Your reason for coming to Canada

The severity or frequency of the offenses

There are other factors to consider as well. The main thing is to be organized and ready to present your case to the officer in a logical and compelling way.

How long is the processing time?

Beyond the restriction of 5 years having passed since the completion of sentencing, the other caveat of a Criminal Rehabilitation application is its processing time. Due to the nature of this type of application and that it must be submitted to the Consulate, processing times tend to average from 6 months to a year or more. For those that need to travel to Canada in the next year, Criminal Rehabilitation is not a viable option.

Where should I submit my application?

If you are considering traveling to Canada with a criminal background, you should consider taking steps to overcome your inadmissibility. By being proactive, you can avoid potentially frustrating or embarrassing situations at the border and present the best case possible to the immigration officer. Our legal team of Canadian immigration lawyers and regulated consultants would be happy to counsel you and help you prepare an application. Don’t take a chance by being unprepared. Let our experience and knowledge work for you!