Crimes that Can Deny You Entry into Canada 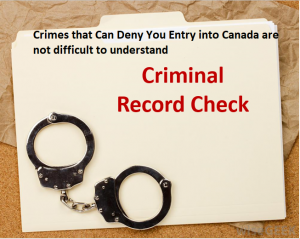 As you may know, a lot of foreign travelers, including U.S. citizens or U.S. permanent residents, with criminal inadmissibility are turned away at the border by the Canadian border officers. Criminal inadmissibility results from a wide range of criminal offenses which can ultimately hider you from entering Canada. The laws between the United States and Canada are quite different, and therefore, it is often very difficult for individuals to figure out how Canada will interpret their offenses in the U.S. In other words, a conviction that may deny your entry to Canada may not deny your entry to the U.S., and vice versa. Often times, the border officers are not trained as lawyers, meaning it is possible that they may misinterpret the law or misapply it to your situation. As a result, it is also important for you seek professional guidance regarding your offences. In this blog, you will learn about your options to enter Canada with a criminal record.

Can a Misdemeanor Make Me Inadmissible to Canada

As previously mentioned, the U.S. laws and Canadian laws are quite different; however many foreign travelers are not aware of this fact. They often assume their misdemeanors in the United States will not cause them any trouble at the border. When examining whether a person is inadmissible to Canada due to criminal conviction, the border officer will only refer to the conviction’s equivalent statute under Canadian law. This can be both a good and a bad thing. It can benefit individuals who were convicted of a crime that is not considered to be a crime in Canada. For example, solicitation is not considered as a crime in Can, and therefore, a conviction for solicitation in the U.S. will not prevent someone from entering Canada. On the other hand, some crimes, such as driving under the influence (DUI) or driving while intoxicated (DWI)  are considered misdemeanor offenses in the U.S., but they are considered to be significantly more serious in Canada. That being said, having a DUI or a DWI will very likely make you inadmissible to Canada.

To determine whether you may be inadmissible to Canada on the basis of a past conviction, you, or an attorney, must consider the equivalent Canadian statute for the crime you were convicted of in the United States. Even though the U.S. laws and the Canadian laws can be quite different, both countries use a similar classification system to categorize the crimes. In the U.S., crimes are classified as either misdemeanors or felonies. In Canada, crimes are classified as either summary offenses, indictable offenses, or hybrid offenses. Summary offenses, which are minor offenses, are roughly equivalent to misdemeanors. Indictable offenses, which are more serious offenses, are roughly equivalent to felonies. Hybrid offenses can be considered either summary or indictable based on the context. If you were convicted of any of the offenses which are considered to be hybrid or indictable offenses, you will be considered criminally inadmissible to Canada.

If you have an arrest record for a crime and were charged but never convicted, or if you were acquitted, you should technically be deemed admissible to Canada. Everyone’s situation can be different, though. The Canadian Border Services Agency will have access to the acquittals and non-convictions on your record when you try to cross the border. If the border officer is concerned about acquittals or non-convictions on your criminal record, this may potentially cause a problem for you to enter Canada.

At this point, you may be wondering about having a pardon or an expungement for your offence(s). Unfortunately, Canada and the United States generally do not recognize each other’s pardon and expungement policies. This means that having an American pardon or expungement will not erase the conviction for the purposes of Canadian immigration or travelling to Canada.

What Can I Do to Overcome my Inadmissibility

There are two major ways by which individuals can choose to overcome their criminal inadmissibility. If you are criminally inadmissible to Canada, you have the options of getting a temporary resident permit, or apply for criminal rehabilitation. Ultimately though, the route you choose to take is dependent on your circumstances. A temporary resident permit allows you to temporarily overcome your inadmissibility and visit Canada. You need to have a compelling reason to come to Canada, and convince an immigration officer you will not be a threat to the security of Canadians for the duration of your visit. You must also inform an immigration officer you will not overstay in Canada. When an officer is assessing your application for a temporary resident permit, he or she will consider whether your “need” to enter Canada outweighs the “risk” you possess to Canadians. If you have successfully received a temporary resident permit, then you can travel to Canada within the time frame that is given on your permit. Criminal rehabilitation is a permanent solution to overcome your inadmissibility. To be eligible for criminal rehabilitation, there are certain requirements you must meet. Factors like severity of the offence, how many offences committed, and the time elapsed since the completion of your sentence(s) are all important factors that an immigration officer will consider. Criminal rehabilitation applications take approximately 12 to 18 months to process.

As previously mentioned, Canadian government is very strict when it comes to assessing foreign travelers’ inadmissibility. In order to compile a strong a temporary resident permit or criminal rehabilitation application, you will need to prepare for the correct documents. However, having to prepare all the required documents can very confusing and exhausting. It is also essential to note that this type of application is difficult to pursue on your own. Therefore, it is highly recommended that you seek out professional and experienced help prior to submitting the application. Akrami & Associates work and have experience with many different immigration matters. We have helped many of our clients create strong Temporary Resident Permit and Criminal Rehabilitation applications. Please feel free to contact Akrami & Associates at 416-477-2545 for more information, or if you would like to book a consultation with an immigration professional for more advice. With Akrami & Associates, there is always a way!