Why are You Inadmissible to Canada 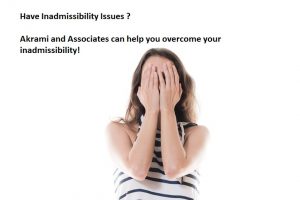 Being deemed a security risk to Canada is a serious accusation. There are special intelligence gathering organizations set up by the Federal government to monitor dangerous groups and individuals. The Security Intelligence Section works in tandem with the Canadian Border Services Agency to keep an up to date database on groups and individuals who engage in activities such as: Any individual that has participated in the above activities will be treated as dangerous to Canadian society and, at the very least, be found inadmissible to the country. It is important to note that if an individual is a member in an organization that is seen as a security risk, even if he or she did not engage in the above mentioned acts, they might still be found inadmissible to Canada.

This is another strictly enforced inadmissibility to Canada. Actions which constitute a human or international rights violation are outlined in the Crimes Against Humanity and War Crimes Act. Any individual that engages in genocide, a crime against humanity, or a war crime is inadmissible to Canada. A crime against humanity is governed by international law and can be summarized as inhumane acts. Examples of crimes against humanity include: torture, imprisonment, persecution, enslavement, murder, and sexual violence. To meet the definition of a crime against humanity, these crimes must be carried out against a particular identifiable group (such as an ethnic minority) or civilian population. War crimes are crimes that occurred during an armed conflict and are also governed by international laws. What constitutes a war crime could be actions such as the torture or ill treatment of prisoners during a conflict.

Anyone who has a criminal history with major crime(s) on record may be found inadmissible to Canada on the basis of serious criminality. If the criminal act were committed in Canada and would be punishable by imprisonment for 10 years or more, then it would qualify under this category. The types of crimes described by serious criminality are at the felony level, or what is often referred to as an ‘indictable offense’. Some possible examples of serious criminality are: murder or attempted murder, weapons charges, or sexual assault. Because of the severity of these types of crimes, it is often difficult to overcome this inadmissibility and gain entrance to Canada.

This type of inadmissibility is more common in that it can refer to any type of offense on record. As long as the offense has an equivalent charge under Canada’s Criminal Code, then it is possible to be considered criminally inadmissible to Canada. Misdemeanor charges such as Driving Under the Influence, Disorderly Conduct, and Theft on a person’s record will require special permission from an immigration officer before being allowed to enter Canada. Overcoming this type of criminality often requires applying for a Temporary Resident Permit or Criminal Rehabilitation.

Medical inadmissibility involves individuals seeking entry to Canada who may be a danger to public health, public safety, or might burden Canadian health and social services (often referred to as ‘excessive demand’). Someone may be a danger to public health depending on his or her medical condition or country of origin. To give a recent example, international travelers coming to Canada from Ebola stricken countries could be prevented from entering the country. Anyone suspected of coming into contact or carrying a highly contagious disease would be required to report for a medical examination and in more extreme cases, quarantined. If an individual is exhibiting health problems or requires assistance upon attempting to gain entry to Canada, Border Services Officers may send him or her to secondary screening in order to ascertain the presence of a serious medical condition. Again, the procedure here usually requires undergoing a medical examination before determining definitively whether the individual is a health risk or not.

Quite often travelers to Canada will be questioned about their plans in Canada and how long they will be staying. An officer may request proof that an individual will be able to cover their expenses as well as the expenses of any dependents traveling with them. This proof could be in the form of a letter pledging support or provision of basic needs from a relative in Canada, or access to online banking accounts. If the officer suspects that the person traveling to Canada lacks the finances to support him or herself while in the country, then it is likely that he or she will be found inadmissible for financial reasons.

The conditions for being found inadmissible to Canada due to misrepresentation are quite broad. When a permanent resident or foreign national attempts to come into Canada, they will need some sort of visa. Even citizens from visa-exempt countries like the U.S. are bound to visa rules established by immigration. Misrepresentation happens when a visa applicant fails to provide complete, honest, and truthful information to an officer. This can be intentional or unintentional as the case may be, but it is still treated as an inadmissibility regardless. Here is a good example of misrepresentation. An American citizen in his mid 20’s is crossing the border from Washington State into British Columbia. When questioned about his visit to Canada, he says that he wants to go snowboarding for a couple of months. However, when the officers examine his car they find extra equipment for snowboard repair. When the officers check his emails on his smart phone, there is a communication with a manager of a Canadian snowboarding school asking when he will arrive in Canada. In this situation, the Border Services Officers would be likely to find him inadmissible due to misrepresentation. It has become clear that the young man will be working in Canada and should have taken the steps to acquire a valid work permit. Instead he attempted to conceal information in an attempt to gain entry to Canada. If successful, this would have caused the officers to make an error in administering the rules set out in the Immigration and Refugee Protection Act and Regulations.

If you think that you may have inadmissibility to Canada such as a medical issue or criminality, it is a good idea to prepare documentation and reasons to gain special permission to enter the country. Our legal team of Canadian immigration lawyers and Regulated Canadian Immigration Consultants can help you assess your situation and potentially overcome your inadmissibility. Contact Akrami and Associates today at 416-477-2545! With Akrami and Associates there is always a way!